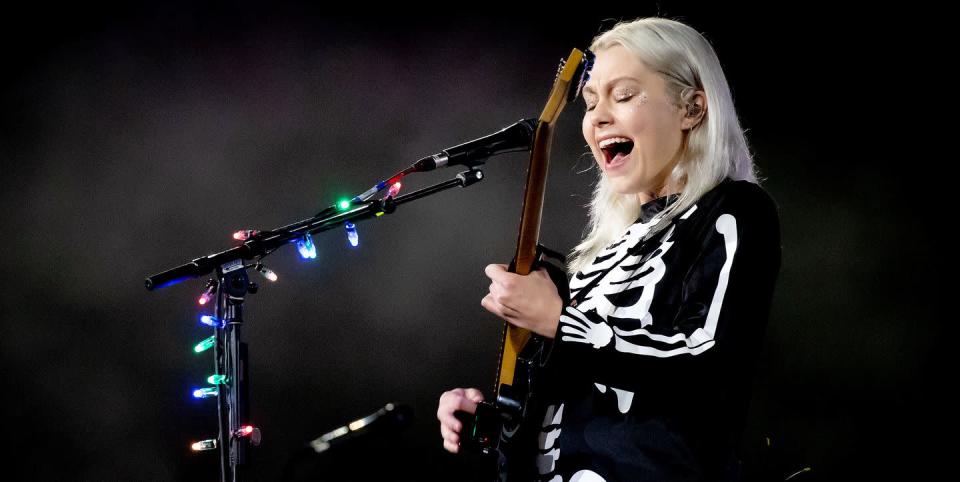 Phoebe Bridgers is on the road for her “Reunion” tour right now, and it’s safe to say that she is H-O-T both on and off the stage. The 27-year-old singer-songwriter took to Instagram on June 7 to promote her upcoming concert with quite possibly the cheekiest (literally) photo I’ve ever seen.

The post perfectly captures her comedic social media presence. Standing in a white tux sans coat jacket, Phoebe’s collared shirt and pants cover up the front of her body. But she’s baring it all in the back. Thanks to the mirror that she is posing in front of, her backside is completed revealed, giving followers a glimpse of her black bra, garter belt and stockings, and her thong. Her toned butt is the main focus of the photo, and honestly, as it should be. Want to drop the leg day circuit, Phoebe?

She kept the caption mysterious, simply writing “by @davis.bates & @jaredellner,” who are the photographer and stylist, respectively, behind the photo’s aesthetic.

Obviously, her followers lost their minds upon seeing this photo. “The best thing to ever happen,” one follower wrote. “BUSINESS IN THE FRONT PARTY IN THE BACK,” another commented.

The “I Know the End” singer typically dresses on the more modest side—wearing mostly variations of her signature skeleton suits and shirts. So this is, um, refreshing, to say the least. My only request now is to get some merch with this picture on it.

Recently, Phoebe attended her first Met Gala alongside boyfriend Paul Mescal, star of Hulu’s Normal People. In her silver halter dress, her toned arms were the main focus—besides that gorgeous dark berry pink lipstick, of course. While she may not be super forthcoming about her workout and health routine, it’s clear she puts in work.

During the pandemic, she did a lot of yoga livestreams with Sky Ting, per New York Magazine. “I’ve been finding Sky Ting Yoga’s livestreams super comforting in quarantine. I bought the monthly subscription to its channel and have been using it every day,” she said. “I keep saying my quarantine body is like Ronda Rousey’s: I’m eating more than ever, but also exercising more than ever, so I’m just gonna be yoked by the end of this.”

Within the health sphere, Phoebe is very focused on women’s rights, specifically the abortion rights made possible by Supreme Court case Roe v. Wade, which will likely soon be overturned, according to a draft opinion from the U.S. Supreme Court that was leaked on May 2.

The singer tweeted just a day later that she had an abortion while she was on tour in October 2021. “I went to Planned Parenthood where they gave me the abortion pill,” she wrote. “It was easy. Everyone deserves that kind of access.” Additionally, according to Pitchfork, she signed a letter in the May 13 issue of The New York Times along with 160 other artists, which is part of Planned Parenthood’s #BansOffOurBodies campaign.